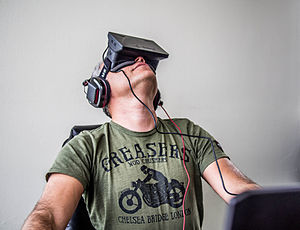 Sergey Orlovskiy using the developer kit version of the Oculus Rift (with separate headphones) The Oculus Rift is a next-generation virtual reality headset designed for immersive gaming. You could be part of history by getting your own Oculus Rift development kit. This is part of the story where the magic started to happen. Following the demonstration of the Oculus Rift prototype at E3 in June 2012, on 1 August 2012 the company announced a Kickstarter campaign to further develop the END_OF_DOCUMENT_TOKEN_TO_BE_REPLACED