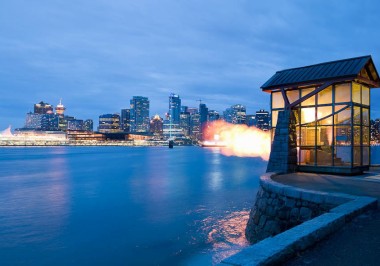 The 9 O'Clock Gun is a cannon located near Brockton Oval in Stanley Park at Vancouver, British Columbia. The Gun is shot every night at 21:00 (9 p.m.) PT. The crests of King George III and Henry Phipps, 1st Earl of Mulgrave, Master-General of the Ordnance at the time the cannon was cast, are on the barrel. The gun is a 12-pound[1] muzzle-loaded naval cannon, cast in Woolwich, England in 1816.[2] Seventy-eight years later, in about 1894, it was brought to Stanley Park by the Department of END_OF_DOCUMENT_TOKEN_TO_BE_REPLACED