Over seven decades ago, history occurred with the debut of Captain America in 1941. 70 years later, Steve Rogers and his star-spangled alter ego have grown to iconic status, remaining a mainstay of the Marvel Universe while also expanding into the realms of television, film and more.

On April 4, 2014, the Sentinel of Liberty returns to the big screen in “Captain America: The Winter Soldier” from Marvel Studios. As the countdown to Chris Evans picking up the shield once more heats up, we present the definitive comics history of Cap, from his debut to the modern day.

Follow along with us weekly and look for more Captain America on Marvel Unlimited and through the Marvel Digital Comics Shop. 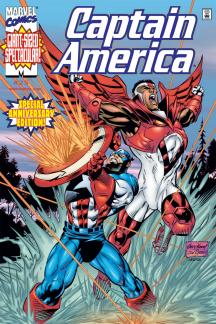 A new millennium brought Captain America another new love in his life, yet also a dark reminder of his past. As the years of 2000 and 2001 progressed, Steve Rogers would learn more of the man who came before him in the Super-Soldier program, clash once again with the scientific criminals of A.I.M., and run headlong into another face-off with his deadliest enemy.

After a flashback to a World War II adventure with Sgt. Fury and the Howling Commandos in CAPTAIN AMERICA #32, Steve Rogers learned of A.I.M.’s resurrected agent, now called Protocide, in CAPTAIN AMERICA #33. The powerful, insane Protocide went after the USAgent first, impaling the former Captain America on his own shield in CAPTAIN AMERICA #34. Cap discovered that his new foe once stood in line to become the first super-soldier, but a faulty serum put him into the deep freeze. Both tried to nab the so-called Omega Compound in CAPTAIN AMERICA #35, with Protocide coming out on top after savagely beating Cap.

Rogers licked his wounds and helped stem the tide of an alien invasion in CAPTAIN AMERICA #36, then actually teamed with Protocide in CAPTAIN AMERICA #38 against the long reach of HYDRA. In CAPTAIN AMERICA #39, A.I.M. managed to manipulate Protocide against Cap once again, but in the end the man seemed to sacrifice his own life to save our hero from a fiery death. At that same time, Cap couldn’t believe his eyes when A.I.M.’s leader unmasked as David Ferrari, the brother of Steve Rogers’ girlfriend, Connie. In CAPTAIN AMERICA #40, Cap wrestled with the thorny problem of a woman who loved him as Steve, but hated him as the Sentinel of Liberty.

Cap went on a quest to ferret out Batroc the Leaper in CAPTAIN AMERICA #41, with a little help from S.H.I.E.L.D., but ended up flying to exotic Khamistan in CAPTAIN AMERICA #42 to discover a brainwashed Nick Fury and find himself captured by David Ferrari. Tied to a nuclear missile in CAPTAIN AMERICA #43, our hero’s rescue came at the hands of Fury, but hell hath no fury like Connie Ferrari scorned. What to do for Cap? Reveal his secret identity to her, of course. Did Connie appreciate the gesture? Apparently not, for in CAPTAIN AMERICA #44, she broke it off with Steve and left him high and dry. 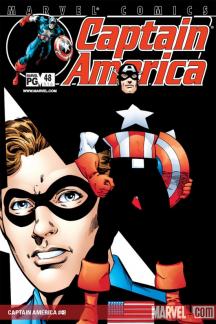 Cap and Fury won, as shown in CAPTAIN AMERICA #48, and managed to make it on time to a long-delayed memorial service for Bucky Barnes, the hero’s partner from his early days in World War II.